21st Century IDEA: How to Meet (And Beat) the Mandate

The 21st Century IDEA is here. While many government agencies we’ve spoken with at Granicus are already on track to meet the requirements, you might be wondering what steps to take (and when).

What Is the 21st Century IDEA?

The 21st Century Integrated Digital Experience Act (21st Century IDEA) is a law signed by Congress on December 20, 2018. It directs government agencies to provide simpler, more cost-effective digital experiences for citizens and, generally, make it easier to conduct business and make transactions online. Read the full text here or continue with our redux below.

Manually processing forms is expensive. In fact, it leads to more than 11.4 billion hours of paperwork annually. Aside from paperwork, it costs significantly less to process government services online. Just look at these numbers:

The savings make a strong argument! Switching to digital processes is a financially responsible move for government.

The private sector has transformed the landscape in recent years and completely altered citizen expectations for service. So, aside from saving taxpayer dollars, agencies will be providing the digital self-service experience that people not only prefer but have come to expect.

By complying, governments will improve the experience for millions of citizens interacting with the federal government every year. This act will drive a digital transformation of federal government services by requiring modern, accessible websites and forms.

Here are a few key highlights of the 21st Century IDEA. You may have all or some of these in the works (or already completed). If not, use these mandates and the timeline (further below) as a powerful tool for making necessary change.

Within 180 days of becoming law (so, June 21, 2019), the Act requires agencies to submit a plan for using electronic signatures. The goal here is to bypass the painstaking (and too common) process of downloading, printing, signing, scanning, and sending a PDF.

Digitize Forms and Make Them Mobile-Friendly

The bill also asks agency heads to make an online, mobile-friendly option available for any in-person government transaction or paper-based process. According to the President’s Management Agency (PMA), there are “more than 23,000 different forms inside the federal government that leads to 11.4 billion hours of paperwork annually, and a poor user experience.” Digitizing services and forms will increase efficiency and decrease costs.

Give Websites a Consistent Look

Government website design will need to conform to web standards developed by the Technology Transformation Service of the General Services Administration. With a consistent look and feel across all federal government web properties, citizens will have a clearer understanding of what to do and where. Government agencies will also need to eliminate or consolidate duplicative web pages.

The 21st Century IDEA also requires that the websites are easy-to-use and accessible to the one in five Americans with a disability. Within a year of the law’s enactment, the head of each executive agency must review their website or digital services and submit a report to Congress with estimated costs and a projected schedule to modernize their digital offerings as laid out in Section 508 of the Rehabilitation Act.

Short-term and somewhat long-term goals are laid out in the 21st Century IDEA. It starts with electronic signatures and ends with forms. As of December 2019, all new and redesigned federal websites need to meet new standards. After that, the next deadline requires forms are digitized, too. 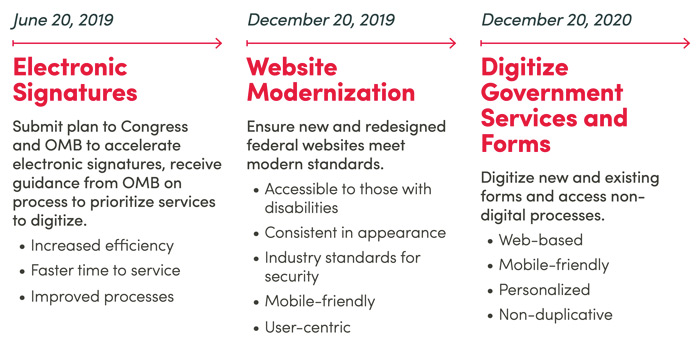 Short- and long-term timelines and goals for the 21st Century IDEA.

A Digital Moment, a Human Opportunity

The passing of the 21st Century IDEA marks a critical moment for the digital transformation of federal agencies. It’s a moment of great opportunity. How many taxpayer dollars can we save by using data-driven feedback loops to answer constituent questions before they have to ask? How many people can be better served if their tax filing is linked to notifications about the programs they’re eligible for? How many citizens can we reach by sending an invitation to an event or meeting on a topic we know they’re interested in based on their prior engagement? A human-centered, strategy-first mindset will drive improved government services, today and into the future. This approach is achievable for governments at all levels.

Download this FREE guide “A Practical Guide to Integrated Digital Experience”  to learn strategic ways to improve your digital presence, save money, and better serve your constituents.