Introducing Video Anywhere: A Modern Video Experience on Any Device

Your citizens’ first interaction with your organization is likely a digital one. Whether they’re completing a transaction or engaging in a public meeting, citizens expect the same modern experience and accessibility from their government that they’re used to in their day-to-day lives. In fact, 94 percent of people cited web design as the reason they mistrusted or rejected a website (Tyson Media). Technology that is not on par with the rising usability expectations of citizens affects perceptions around transparency, competency, and service of government. To help you keep up with the changing landscape of device technology, Granicus has developed Video Anywhere – a modern, intuitive streaming video technology that provides a consistent modern experience across all devices.

During the last reported quarter, mobile accounted for 58 percent of online video views, up from 56.5 % (Statista)

What is Video Anywhere? 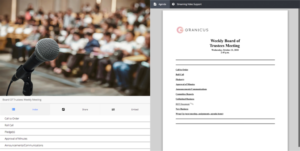 Video Anywhere is a responsive design feature implemented for your Granicus Video solution that automatically resizes, moves, hides, shrinks, or enlarges certain video elements for optimal viewing across all devices (desktops, tablets, and mobile phones). It ensures that the video isn’t shrunken within the screen and that controls operate as expected on any given device.

Over half of the population are multi-platform users (comScore).

How can you get Video Anywhere?

Contact Granicus Support to get Video Anywhere turned on today.

Learn other ways that Granicus is responding to the rising expectations of citizens around access and usability.