With the short-term rental market exploding in the last several years and showing no signs of abating, many local governments are facing the rapid expansion head on — by banning these rentals entirely. But is a ban on companies like Airbnb, Homeaway, VRBO and others enforceable or even desirable?

While your local government may feel that a full ban is the best tactic, keep in mind that a ban is hard to enforce, as it forces these rentals underground, and it may intensify the debate about homeowner rights, leading to civil strife in the community. Moreover, a ban on short-term vacation rental properties can deprive your community of possible benefits, such as an increase in tourism revenue, tax revenues, and spending from homeowners with greater income streams as a result of their rental income.

Another key consideration is the legality of a ban. Cities and local governments are charting new waters as they interact with companies like Airbnb and Flipkey; it’s important to keep in mind that, without a strong legal foundation, a ban could be met with a lawsuit. In fact, here are many examples of short-term rental bans that resulted in legal action:

New York City is Airbnb’s biggest market in the US — so it came as an unexpected blow to the platform and its renters when New York’s Governor, Andrew Cuomo, signed a law prohibiting “illegal” listings on the platform in October 2016. The move by Cuomo called back to a 2010 law prohibiting the rental of an entire apartment for less than 30 days (allowing landlords to keep rentals off the market and also circumvent hotel taxes and zoning changes), and fines could reach $7,500 (after multiple warnings). Airbnb filed a lawsuit in December of the same year, contending that Cuomo’s law violated the First Amendment and the Communications Decency Act. The city was able to settle with Airbnb when the city agreed to prosecute the renters and not Airbnb itself for rentals that violated the new law. Now, Airbnb hosts must make sure they are in compliance with the law before renting out their homes, by triple checking their lease agreements and zoning laws, collecting hotel taxes and ensuring that a host is present when the home is rented so as not to violate the New York State Multiple Dwelling Law. Of course, without access to an updated list of rentals and insight into the goings on at each renter, the city’s enforcement of the law has been lacking. As a result there are currently more than 40,000 short-term rentals in New York and it can therefore be argued that the ban has been far from successful in achieving its goals.

California’s coastline, with its sprawling beaches, is a big tourist draw — so it’s no wonder that short-term vacation rentals would proliferate there. To address this, the City of Santa Monica placed a ban on short-term vacation rentals in 2015, after complaints from “irritated neighbors, affordable housing advocates and the hotel industry.” Santa Monica’s law featured stringent requirements for hosts and subjected online platforms to review before being allowed to post host information. Both hosts and the online rental websites were held liable and subject to both civil and criminal liability. Airbnb retaliated with a lawsuit, claiming that Santa Monica violated their First and Fourth Amendment rights. In 2017, Santa Monica amended their law, although it remains one of the strictest in the nation, and the legal battles continue on. As in New York it is also clear that the law isn’t fully working as intended. In fact, a recent search of the City showed ~1,400 short-term rental listings across 22 different short-term rental platforms. 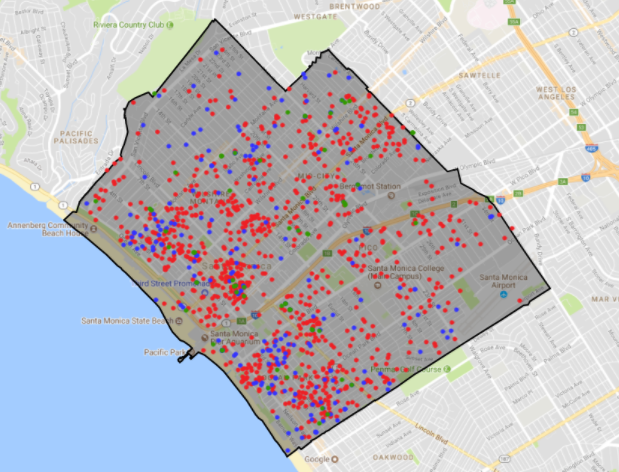 The rest of California is not without its short-term rental controversy and the City of Anaheim provides a prime example. Anaheim is home to Disneyland, making it an ideal location for short-term vacation rentals; however, with the explosive growth of this new market, existing homeowners raised concerns about the influx of tourists into residential neighborhoods. In 2014, the city adopted an ordinance requiring all short-term rental hosts get a permit and pay their taxes, but as the market continued to explode, the City changed policy and issued a moratorium on new permits. The 2016 moratorium and ban on new rentals gave existing short-term renters 18 months to phase out their businesses. The change in policy was immediately faced with lawsuits from Airbnb, HomeAway and the Anaheim Rental Alliance. Facing these costly lawsuits, the City changed direction again and eased some of the restrictions and sought a legal settlement. As part of the settlement the City also removed the language from its ordinance that holds the web platforms accountable for unlicensed rentals in the city.

These are just a few examples of city governments that have dealt with legal battles as a result of the short-term rental market’s explosion online and subsequent bans; there are many other cities that have dealt with similar costly and high-profile lawsuits (like San Francisco). Rather than turning first to a full out bans, local governments should consider if it may make more sense to put in place compromise regulatory frameworks that allow short-term rentals that meet certain requirements while protecting the interests of the broader community. By doing so, communities can can harvest the benefits of this new industry and avoid exposing themselves to expensive and time-consuming legal battles. Cities like Denver, Los Angeles, and Vancouver, British Columbia, are doing just that. While the specifics
vary, the underlying idea is the same: Explicitly identify the unwanted behaviors and negative consequences of short-term rentals, and devise specific, practical policies to mitigate them.

With the advancements in big-data technology it is now possible to enforce such policies, and identify addresses of short-term rentals to bring them into compliance with local rules. Many innovative municipalities including Placer County, California; Durango, Colorado; Asheville, North Carolina; and Islamorada, Florida, already use such tools and have seen double-digit improvements in compliance and revenue. This allows these cities and counties to double down on enforcement to further ensure that short-term rental operators stay within the designated zones, pay their fair share of taxes, and are accountable and respectful of neighbors.

If you are looking to implement and enforce effective short-term vacation rental regulations in your community, Host Compliance offers a comprehensive suite of solutions used by over 80 local governments. You can learn about our short-term rental related consulting services, compliance monitoring and enforcement solutions and request a complimentary short-term rentals assessment here.