To meet her deadline, Barbara Wilson, Director, Integrated Multimedia and Marketing at West Chester Township had only three months to complete the new website launch. With a partnership with Granicus in place, Barb not only launched on time but stood up a highly accessible website that is a “welcoming, digital front door” for the community.

Tell me about the lifecycles of your previous sites?

Our original site was built by the township’s IT department. It worked for a time, but eventually, there was a significant disconnect between content and technology. Our next site was an improvement and was designed and hosted externally. It worked well and offered some capabilities that were useful. However, it was very tied to templates and restricted design. After about nine or ten years, I decided it was time to move on. The big leap we wanted to take was to make the site more visually appealing. Additionally, we wanted to be more open to content development by other parties in the township.

Eventually, we went with Granicus because of the visual impact of their client’s sites. While I appreciated, that Granicus has a proven methodology that takes a certain amount of time. We wanted to react more quickly, and your developers were responsive to an accelerated pace. 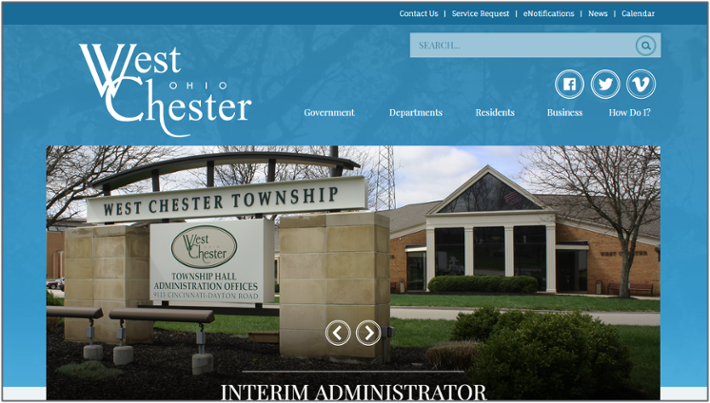 “Speedy” is a relative term, how long did it take to launch?

We didn’t want to renew with our old vendor, so we turned our site around in three or four months. Of course, that required a lot of really directed effort. I would strongly caution those with short turn-around times that even now there are pieces that we missed due to timing, so it would have been nice to have the opportunity to settle into the technology. We ended up doing some re-learning or making adjustments post launch, which was tedious. It wasn’t ideal to move that quickly.

How did you receive input from stakeholders?

We manage all the digital assets of the township and anything that’s related to marketing. By virtue of our department and how it functions we didn’t have to win anyone over. We invited department representatives to provide input as to what they wanted to see. They also participated in the vendor selection, community assessment and surveys.

Interested in learning more about the West Chester Township’s accelerated launch journey. Stay tuned for Part 2. In the meantime, check out how one of Vision’s Graphic Designer’s approaches her work.