Election Day in the United States is on Tuesday, November 6.
“Have you voted early?”
“Do you have a plan to vote?”
“Can our candidate count on your support?”
“Contribute to the cause!”
“Blue wave!”
“Red wave!”
“The election of our lifetime!”

If you’re of voting age in the US, you’ve no doubt been inundated with messages across just about every medium. Television ads flood the air, mailboxes are overflowing with campaign flyers, fundraising emails are pouring in, phones chirping with text messages from political parties. And then there’s social media. It can be overwhelming.

It’s not just the politicians, political parties, and issue groups that want citizens to know about the election, however. As the overseers of election, government is sending messages about how to register, where to vote, and other critical information.

At Granicus, we wanted to find out more about public sector outreach regarding elections, so we examined the millions of bulletins sent out by our 4,000 government clients. We compared bulletins sent through govDelivery from August 1 to October 31 with subject lines containing keywords like “vote,” “voting,” “election,” and “ballot.” We also looked at website keyword searches from our govAccess clients containing the keywords “early voting,” “election,” “vote,” and “ballot.”

More time, energy, and money tends to be thrown at presidential-year elections, but it seems that all sides are more pumped up this year. That’s true of government too, which has more than doubled the number of email recipients it has sent messages to with election-related keywords. In 2016, government organizations sent out 1,249 bulletins to just over 11 million (non-unique) recipients. By 2018, that number swelled to 1,571 bulletins reaching more than 25 million recipients. 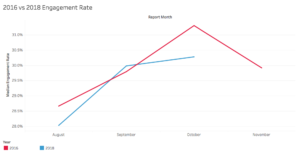 Citizen engagement with election-related messages remains consistent between 2016 and 2018, with each showing increased interest from August through October. In the month leading up to Election Day this year, the engagement rate reached 30.3 percent.

A huge push at the end

Citizens are hungry for information

In a democracy, there is perhaps no civic duty more important for citizens than that of voting. Do you need more information about how to vote on Election Day? Check out your Secretary of State’s office or visit the federal government’s voting website.

And while you’re in the voting booth, don’t forget about the local clerks and election judges that make it possible!